Top Newspapers in the World

The Top Newspapers in the World are:

The Times of India

It’s been almost half a Millenium since the oldest direct handwritten news sheets circulated widely in Venice in 1566. Newspapers, in their modern form, started appearing in Germany in the 16th century. They were printed, dated, appeared at regular and frequent publication intervals, and included a variety of news items.

Although today, the written media does not have the same popularity as in the old days, newspapers continue to feed the hungry minds of readers around the world. 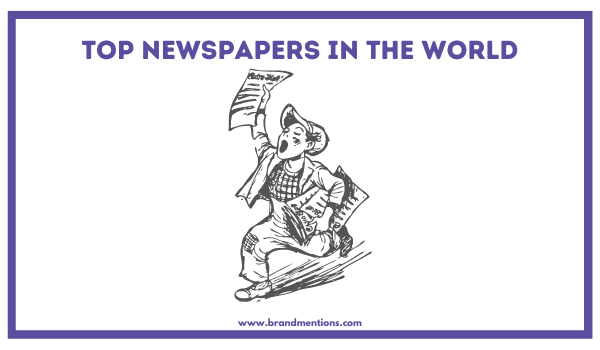 Here are the top newspapers in the world that stood the test of time:

The Wall Street Journal - Founded in 1877, in Washington, D.C, USA. The newspaper publishing agency operates under the division of Dow Jones. It has an average circulation of about 3.6768 with a daily readership of 1 million including its digital editions. It has one 37 Pulitzer Prizes.

Dainik Bhaskar - Founded in 1948, in Bhopal, Madhya Pradesh, India, it is the most read newspaper in India, and the 3rd in the world. With daily circulations of over 4 million, it is India’s most popular newspaper, delivering daily news from both local and national events.

The Guardian - founded in 1821 in London, UK, has more than 1 million daily readers. Initially named The Manchester Guardian, it changed its name in 1959 to the one we know now. It is the largest newspaper in the UK, owned by the Scott Trust. Since 1855 it has been printing out daily newspapers, becoming a beloved national newspaper.

China Daily - founded in 1981 in Chaoyang District, Beijing China, is the first national daily English-language newspaper in China after the establishment of the People's Republic in 1949. The newspaper is targeting mainly an international audience including foreign diplomats and tourists by translating major Chinese newspapers.

USA Today - Founded in 1982 in McLean, Virginia, USA, is one of the topmost rated newspapers across the world, with over 37 different printing sites in the country. It delivers high-quality and engaging content across print, digital, social, and video platforms.

The Washington Post - Founded in 1877 in Washington, D.C, USA. This American Daily is currently owned by Jeff Bezos under Nash Holdings. Focused on political reporting, it has earned 69 Pulitzers and it is read and beloved by an international audience.